As I look back on 40 years of Cat’s Meow, I think about all of the people that have helped me grow Cat’s Meow to what it is today. I'll start by sharing more about our first retail store.

The story of Cat’s Meow started in 1982 when I was selling a variety of crafts to a local consignment shop. While making a delivery one day, I saw a little wooden house in the display of a product and immediately thought I could create something better. 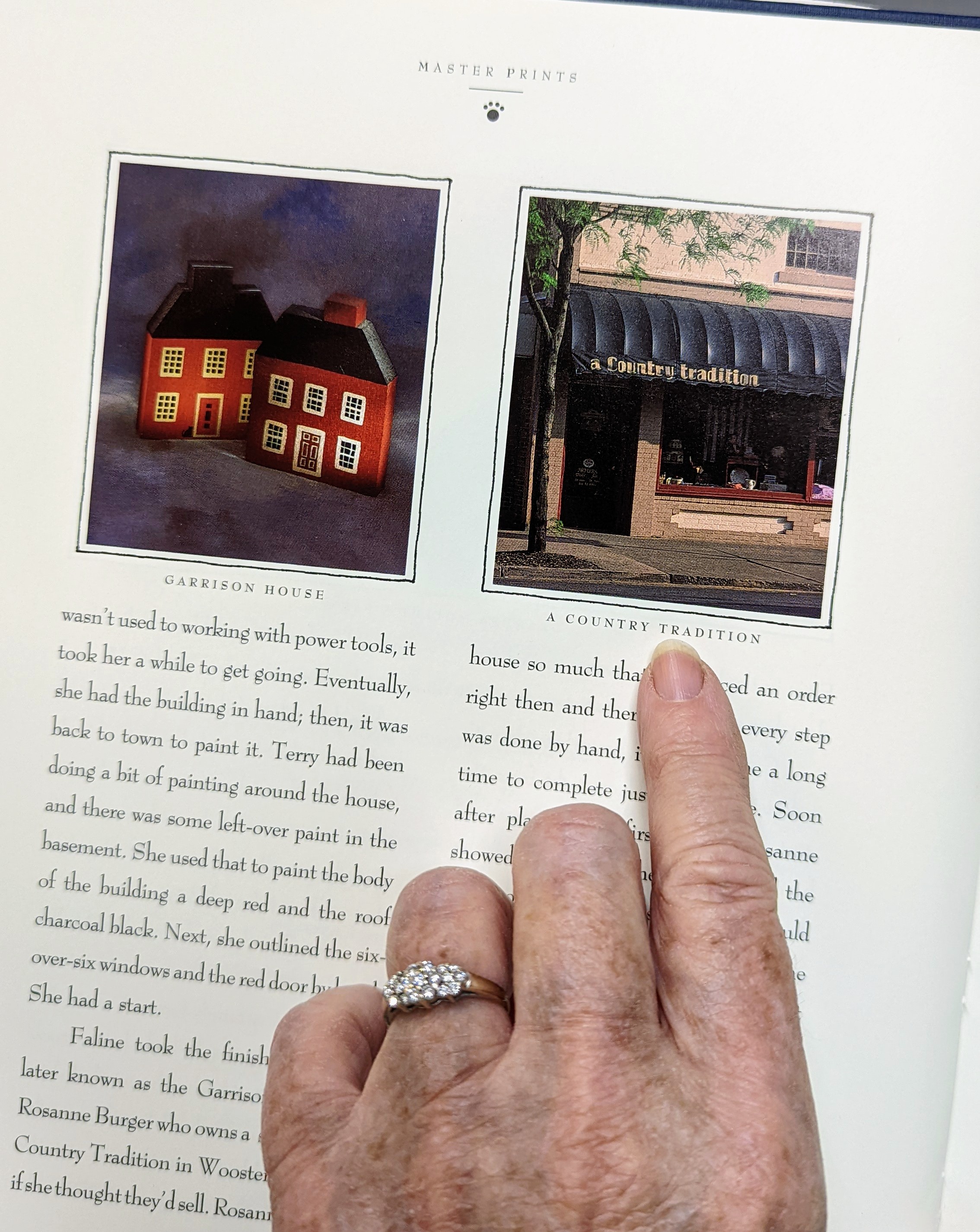 After 40 years, this is the only photo we have of Rosanne's store, A Country Tradition.

I went home, found some scrap wood, and crafted a building. I then took it to A Country Tradition, another store in my town. The owner, Rosanne Burger, loved the house so much that she placed an order right then and there. 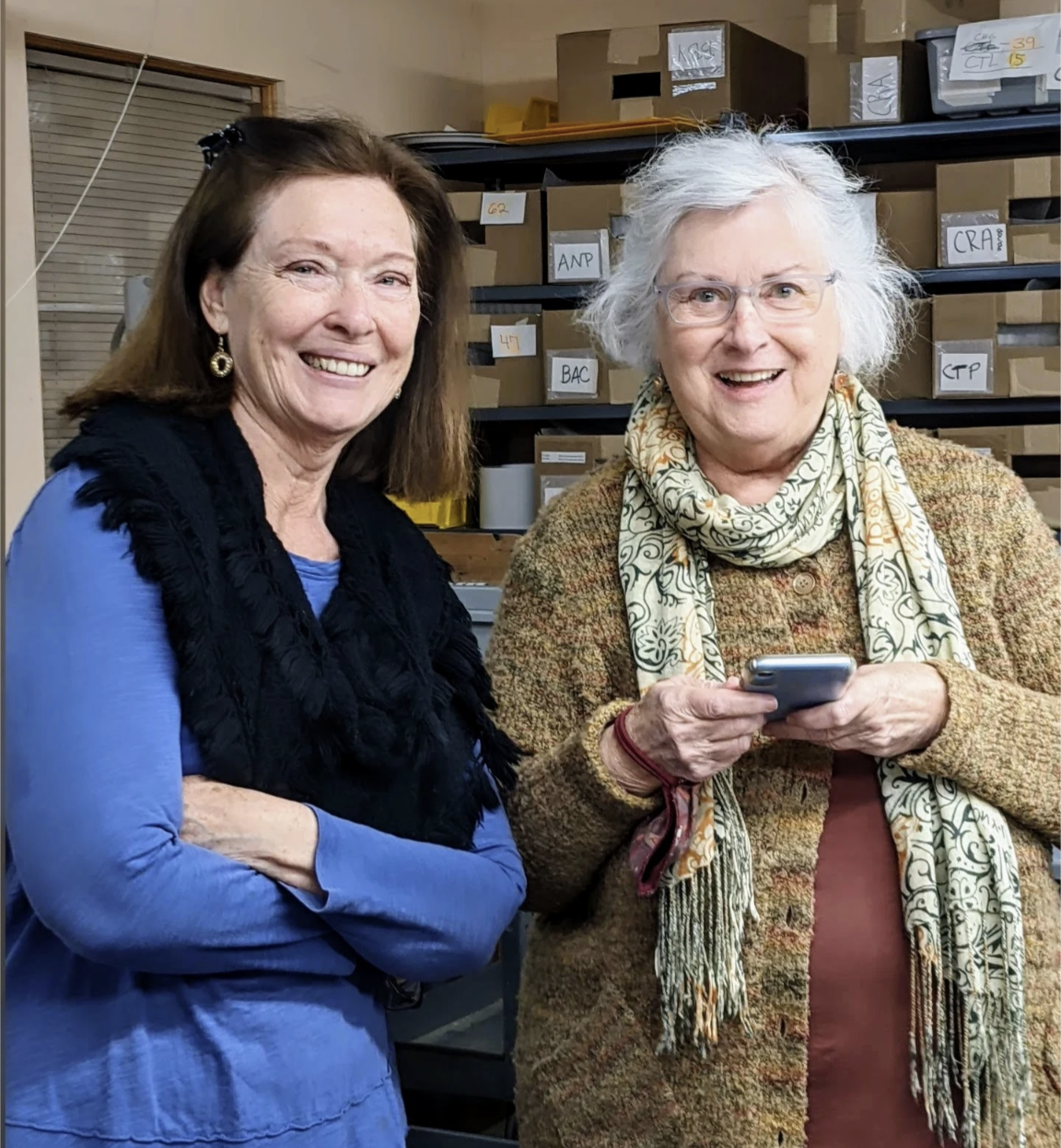 Looking back on it, I walked into the perfect store, not fully knowing what her focus was.

So many things came together at that exact moment without me realizing it.

In the last few years, I’ve wondered to myself; what would have happened if Rosanne didn’t like my house creation? Would I be in business today? Would I simply have gone to another store?

We’ll never know that answer, because at that moment in time, September 1982, a woman took her time to feed into a younger woman…and so…Cat’s Meow Village was born!

In the words of Rosanne,

“Faline came to me with her design at the height of the crafts movement. People were really interested in all types of handwork. My shop has specialized in finely-made folk art - from slipware pottery to hand-carved and painted birds.

At that time I carried supplies for making stencils, another traditional folk art form. The art of stenciling was just gaining in popularity. When Faline approached me with her house, I thought the idea was terrific because I have always loved architecture.

She needed a way to increase production, though, if she wanted to reach more people with the houses. I introduced her to stenciling because I thought people would like its subtlety. In all my years in business, I’ve known lots of craftspeople, but none who’ve accomplished what Faline has.” 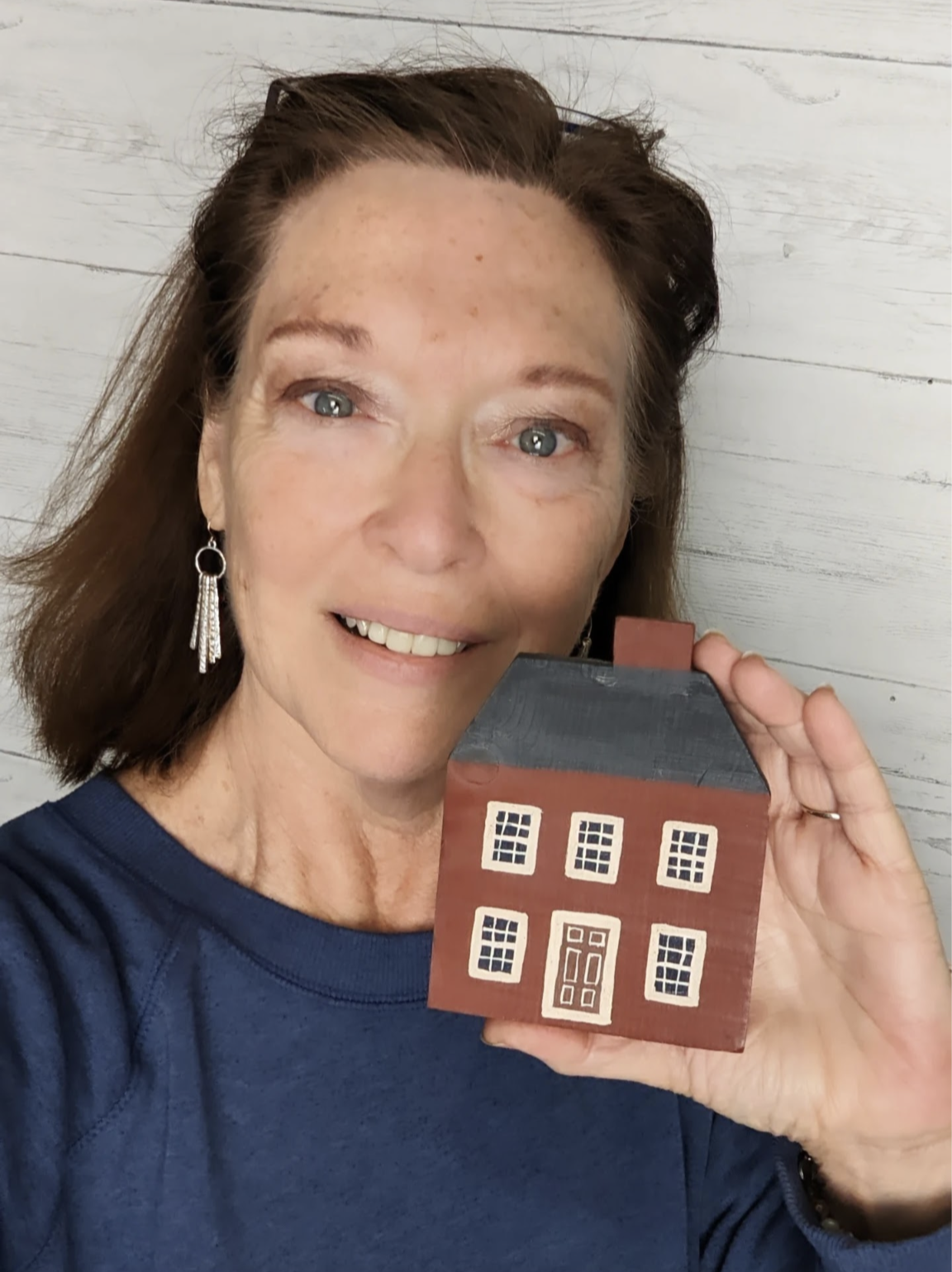 The first house I created and showed Rosanne was named the Garrison House. Then we drew up a Federal House and a Victorian House. All we needed were a few “businesses” and a school building. 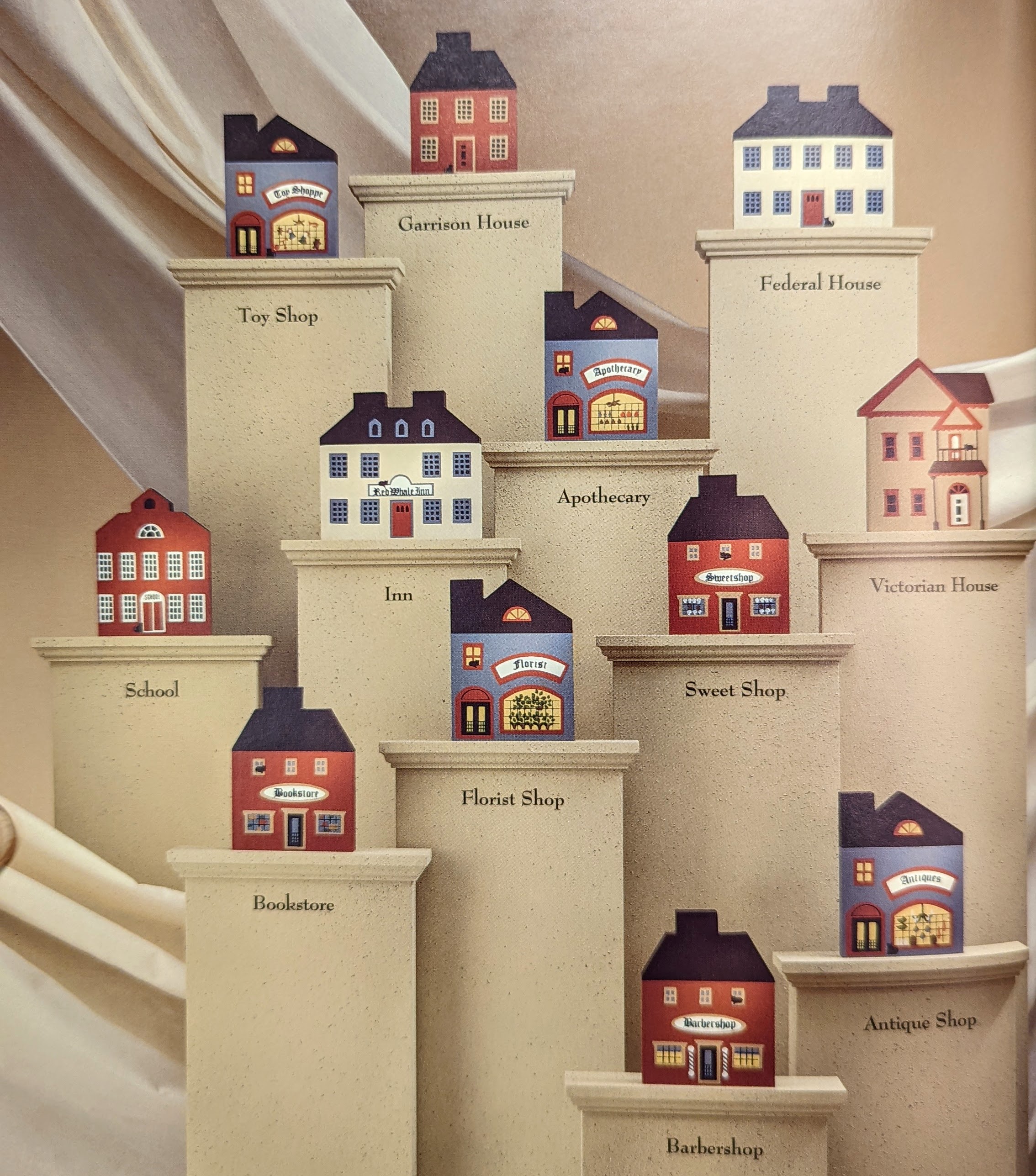 Our discussion around “trademark” came to Rosanne saying, “what do you like?”. I mentioned that I had been making hundreds of calico cat stuffed doorstops to sell, and for some reason decided to order business cards and stationery that said The Cat’s Meow. 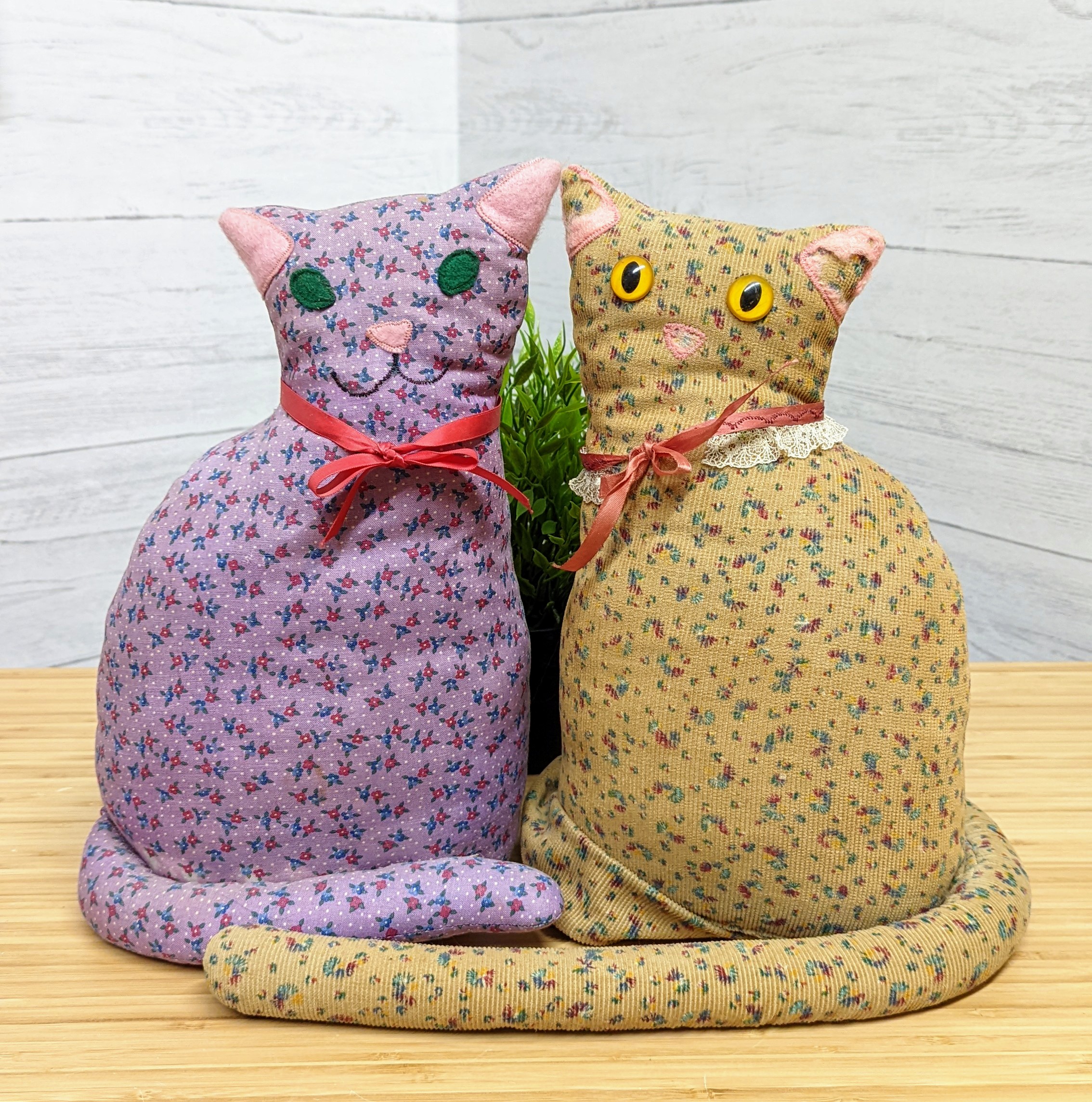 Not wanting to throw them away, plus growing up on a dairy farm having cats my whole life, I suggested a cat on every design. Rosanne liked that idea and I cut my first “cat stencil” and started stenciling cats of every color on my houses.

Through the years, Rosanne has been a sounding board for me, from new design inspiration to business decisions.

The last question I remember consulting with Rosanne on was in 2013. I had spent nearly 18 years “semi-retired” from the business while I raised my daughter, Grace. At the time she was ready to set off into the world, I was summoned to the workshop with the directive to either close the business at the end of the year or figure out how to make it profitable again.

I spent time listening to accountants, attorneys, bankers, and other consultants, but it was Rosanne’s door I knocked on to get advice and grounding.

You see, Rosanne’s store had a fire a good handful of years ago, and she was advised to close her doors and retire. I wanted to know how she really felt about that all these years later. She put the fire in my gut when she said, “I should have never listened to all that advice and gone with my gut, which was to reopen my store”.

I am forever grateful for Rosanne saying yes, and her guidance and support throughout my 40 years in business.

I hope my story and Rosanne’s heart inspire you! 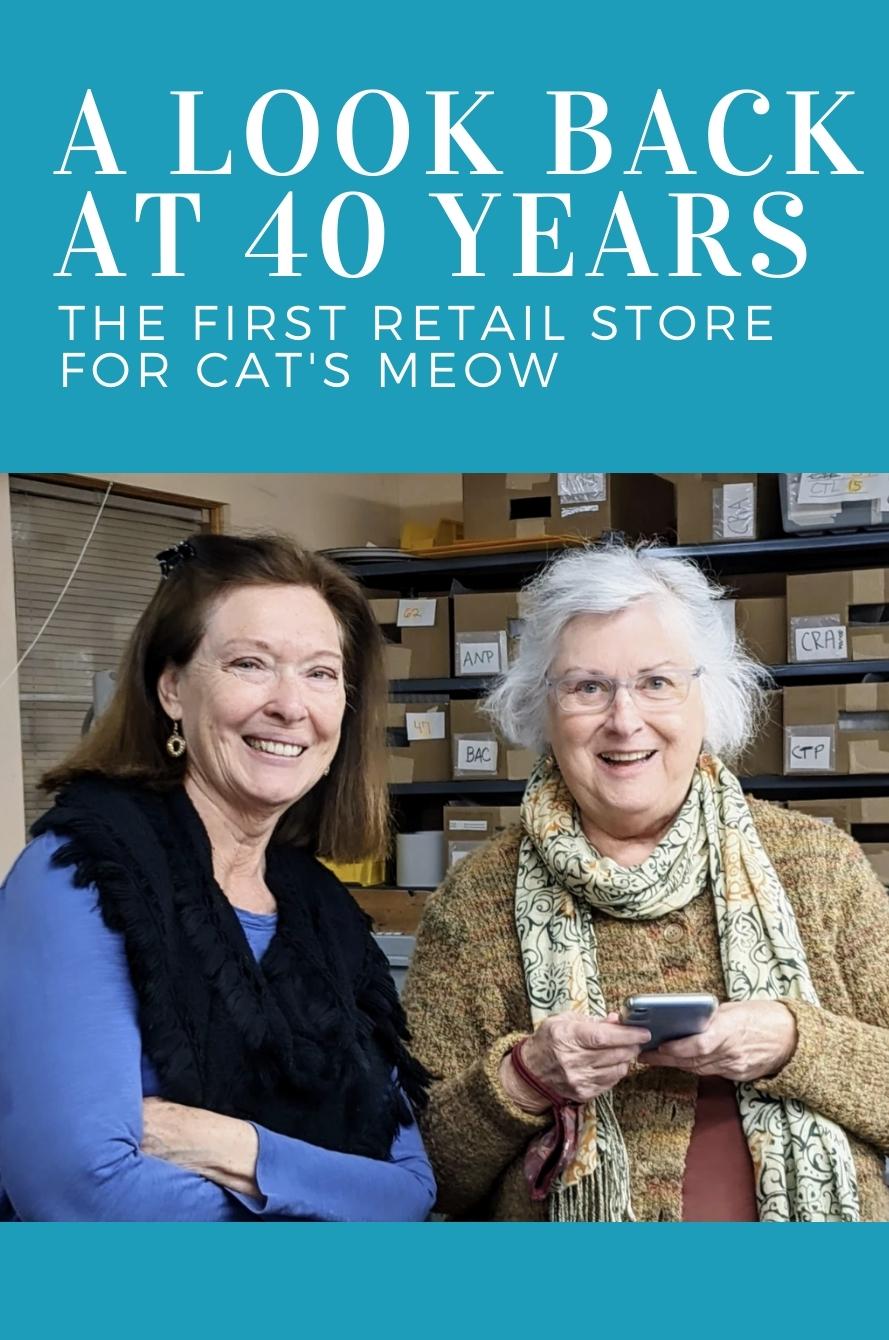