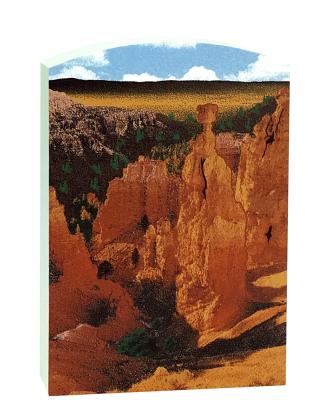 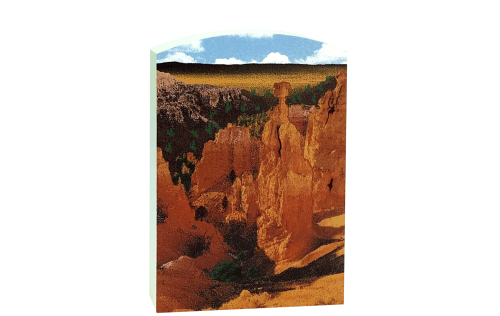 If you've been to Bryce Canyon, Utah, then you're familiar with the famous rock formation, Thor’s Hammer!

Part of Bryce Canyon is made up of limestone, mudstone, and sandstone eroded to create hoodoos.  Hoodoo, also called fairy chimney, tent rock, or earth pyramids are found in dry, hot areas around the world. However, they are most abundant in Bryce Canyon National Park.

One famous Hoodoo resembles the mythical hammer of the Norse God, Thor.  This is one of the most well-known formations in Bryce Canyon and can best be seen on the Navajo Trail.

Set our wooden scene of Thor's Hammer in a place where you will catch a glimpse of it every day, bringing back memories of your trip of a lifetime.

We handcraft this scene from 3/4" thick wood with colorful details on the front and the story on the back.

Look closely and you'll find Casper, our black cat mascot, resting in a cool spot under a bush in the canyon!