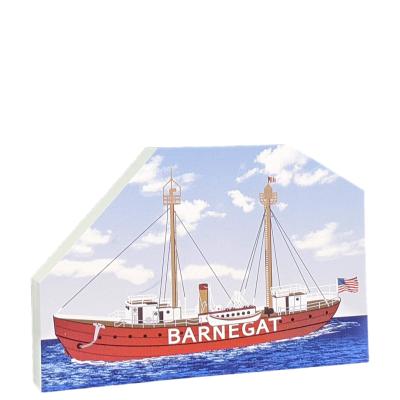 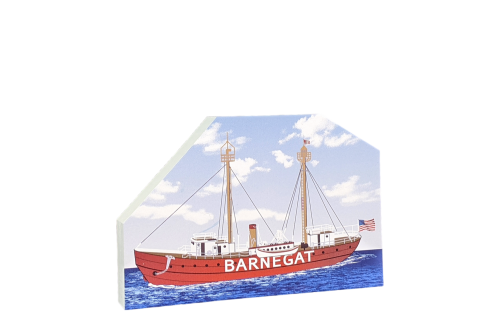 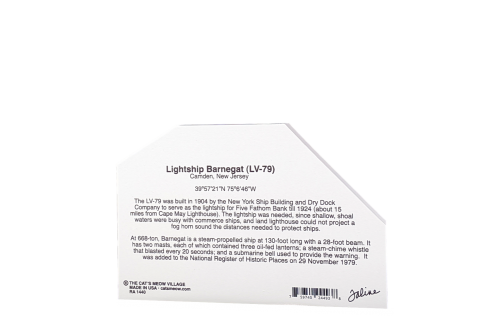 One of the oldest of the few lightships in existence, the Lightship Barnegat is the last of its kind, embodying the steel-hulled lightship history of Long Beach Island.

Lightships and their crews are the unsung heroes of the coastal sea. Tasked with warning other vessels of impending hazards, they rode at anchor through hurricanes and perilous conditions when all other ships sought safety. Considered the most dangerous of assignments, many lightship sailors lost their lives while protecting the lives of others.

The Lightship Barnegat LV/79, was built by the New York Shipbuilding Company in Camden, New Jersey in 1904. The steel-hulled, 688-ton, steam-propelled 130-foot Lightship Barnegat was designed with two masts displaying a total of six oil-fueled lanterns, a steam-chime whistle that sounded every twenty seconds, a submarine bell, and later a radio beacon. Assigned to the newly created Barnegat Station, her role was to warn ships of the shallow shoal waters because the land lighthouse could not project a foghorn sound the distances need to protect ships.

It was added to the National Register of Historic Places in 1979.

We've crafted this keepsake from 3/4" thick wood with colorful details on the front and it's story printed on the back. Made in the USA.

Look for Casper, our black cat mascot, taking an afternoon catnap on the deck! He's the sign of an authentic Cat's Meow.  Satisfy your Light House decorating itch with this colorful replica and add more pieces to make a Light House Village!