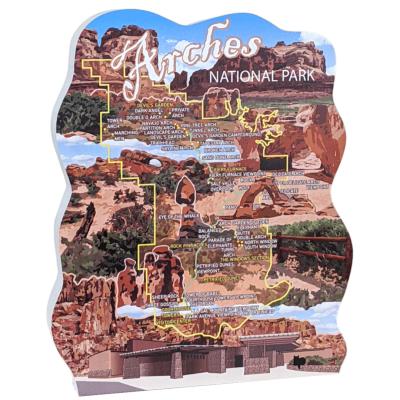 Arches National Park lies north of Moab in the state of Utah. Bordered by the Colorado River in the southeast, it’s known as the site of more than 2,000 natural sandstone arches, such as the massive, red-hued Delicate Arch in the east. Long, thin Landscape Arch stands in Devils Garden to the north.

Other geological formations include Balanced Rock, towering over the desert landscape in the middle of the park.

Administered by the National Park Service, the area was originally named a national monument on April 12, 1929, and was re-designated as a national park on November 12, 1971.

This ¾" thick wooden map is handcrafted in the U.S. with colorful details. It can set neatly on a shelf, wainscoting, or window/door trim to remind you of a special place you've visited or dream of visiting someday.

Look for Casper, our black cat mascot, waiting outside the visitor center for you. This is the sign of an authentic Cat’s Meow!