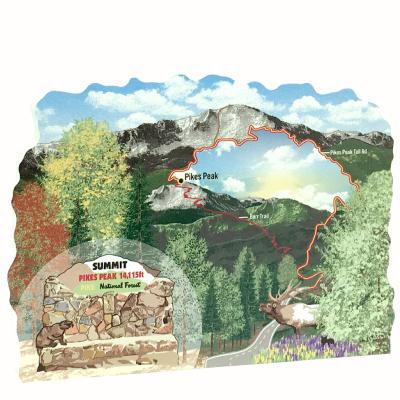 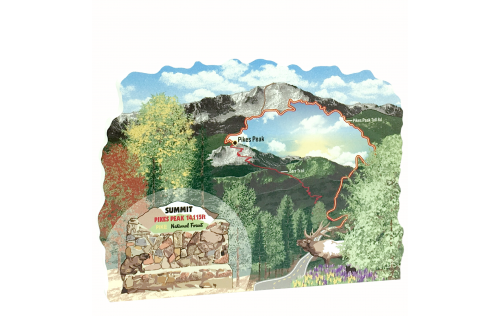 Pikes Peak, fondly known as America’s Mountain, stands at 14,115 feet above sea level just 30 miles west of Colorado Springs, Colorado. Over 500,000 visitors yearly ascend its heights either by vehicle (on a 19 mile road), hiking, biking, or riding the cog railroad.

Remember your trip up the side of this mountain with our 3/4" thick replica that includes Pikes Peak Toll Road and the summit sign.

Located in the Rocky Mountains, the peak was first discovered in the early 1700’s, but it wasn’t named Pikes Peak until after Zebulon Pike led an expedition of discovery in 1806. Though he and his team never made it to the summit due to waist-deep snow, the peak was given his name.

We handcraft this shelf sitter in our small workshop in Wooster, Ohio where Casper does the final inspection before it's bagged. Even though he's our mascot and a figment of our imagination, we still rely on his keen "rodent-catching eyes" to make sure our craftsmanship passes the 4-paw test. (You believe this? You're one of our tribe!)

But anyways, if you look closely at our design, you'll find Casper hiding among the flowers.