Tour Oldest Lighthouses in the U.S.

Are you headed to New England this summer?

Or maybe you live there and you are looking to explore. Head to the 5 oldest lighthouses in the US.

We have an extensive collection of Lighthouses from across the U.S. and the ones featured here are in this collection. They're all within a few hours of each other, so that makes it easy if you want to visit them as a group. 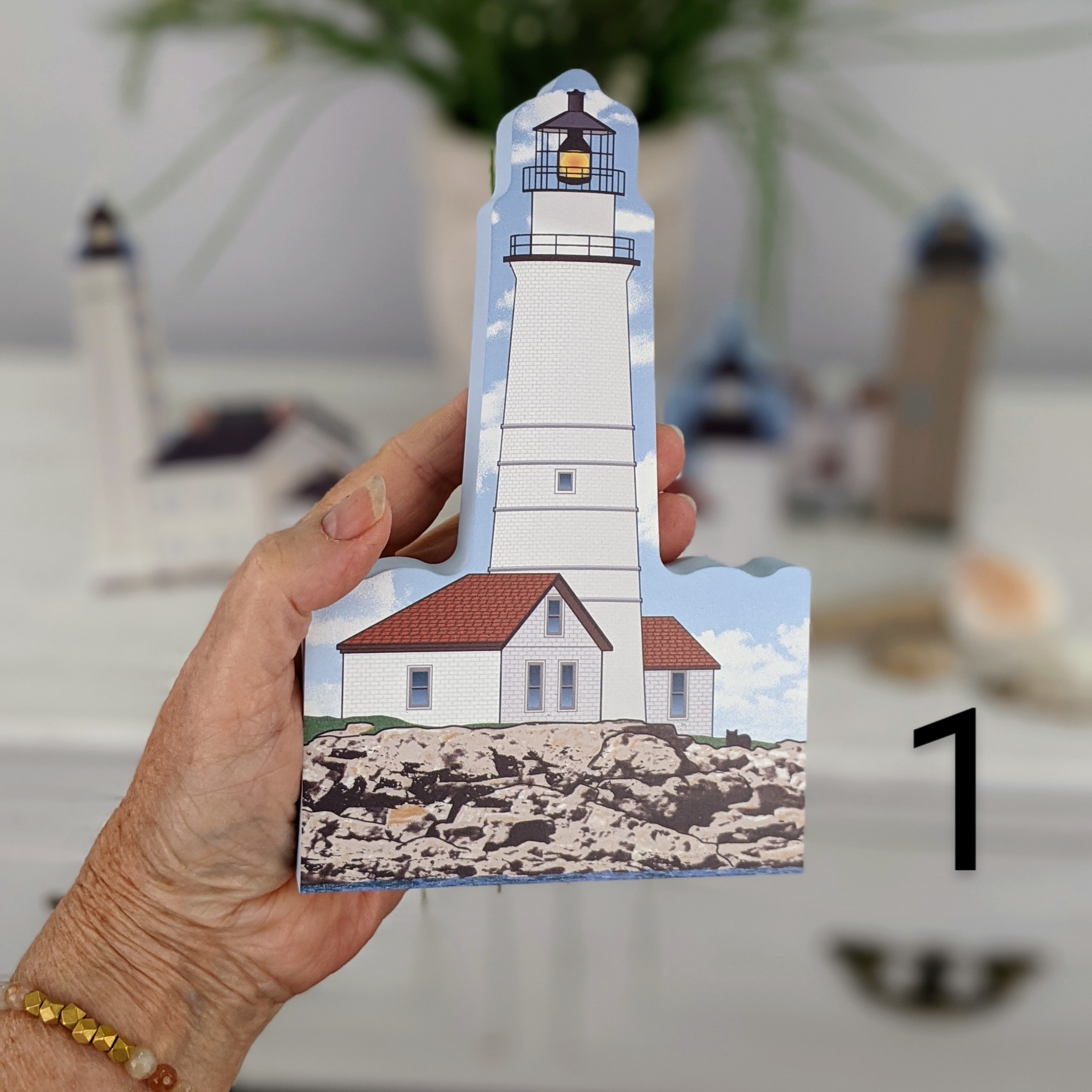 Constructed in 1716 by the colony of Massachusetts, the Boston Light directed vessels carrying merchants' goods safely into port.

As the oldest true lighthouse in North America, it has been host to more keepers than the United States has had presidents.

TRAVEL TIP: The lighthouse is not open to the public but can be seen up close during a Boston Harbor Islands tour. 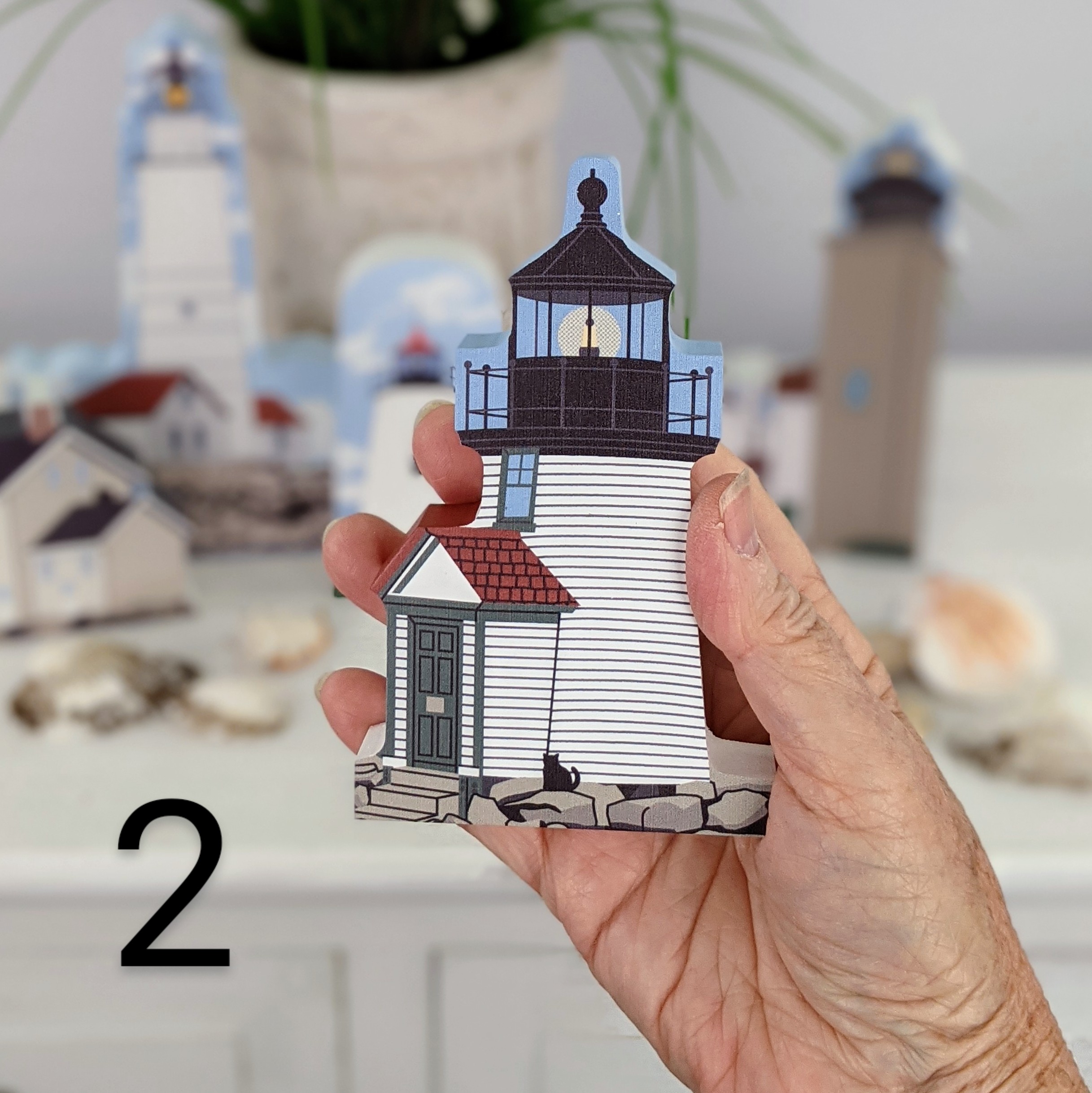 America's second-oldest lighthouse, Brant Point, owes its existence to sea captains pleading for a lighthouse to help them find the harbor.

After the citizens raised 200 English pounds, this little wooden lighthouse was built in 1746 on Brant Point, at the entrance of Nantucket Harbor.

TRAVEL TIP: This is still an active Coast Guard post. You can walk to this lighthouse and enjoy the surrounding area, but it is not open to tour. 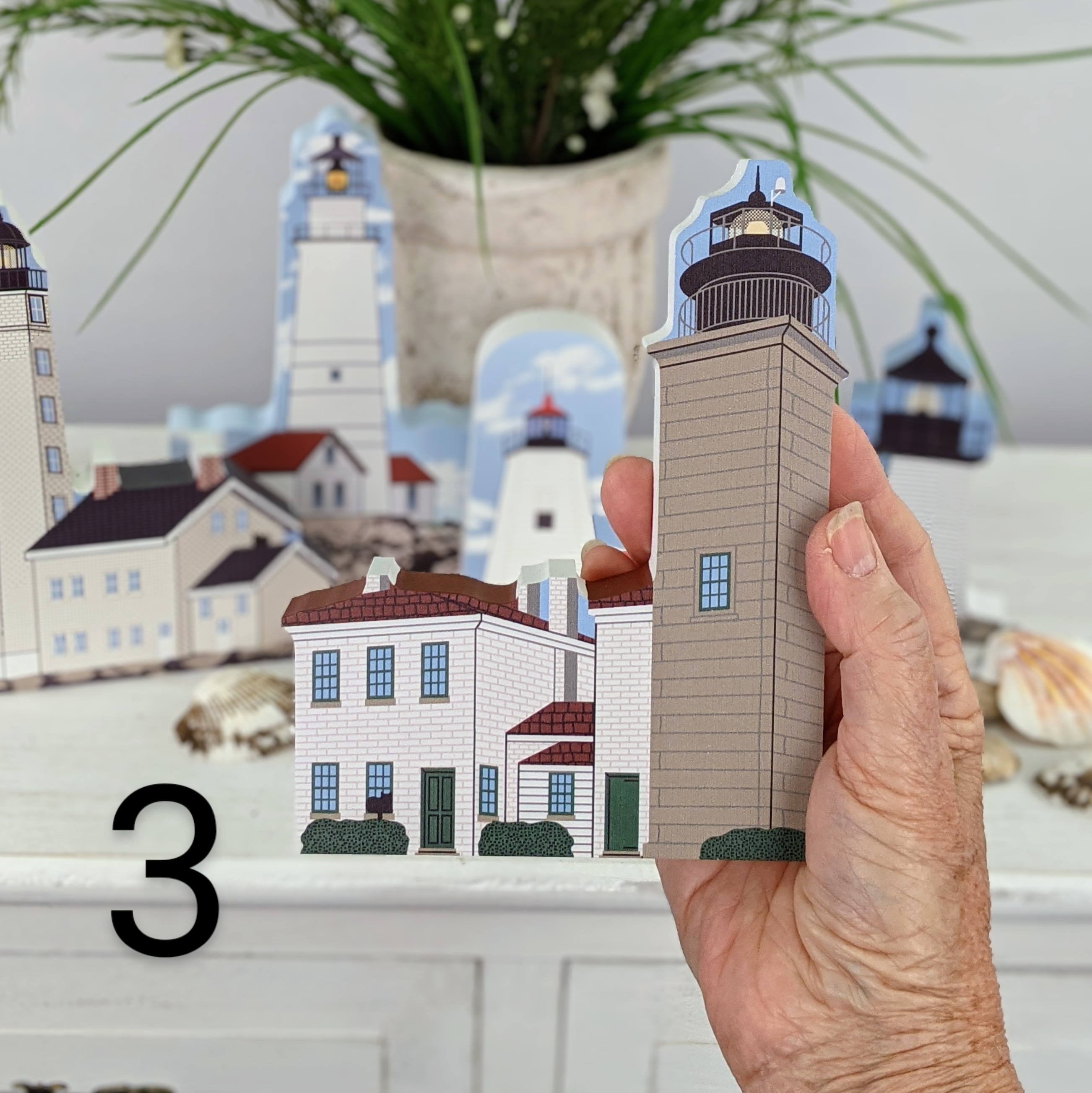 America's third-oldest lighthouse, Beavertail Light, was built in 1749. It was later reconstructed after the British set it on fire during the Revolutionary War. The present tower was built in 1856 and perches 64 feet above sea level.

TRAVEL TIP: The grounds are open to the public and there is a museum in the keeper's house. The tower is sometimes open for scheduled tours. 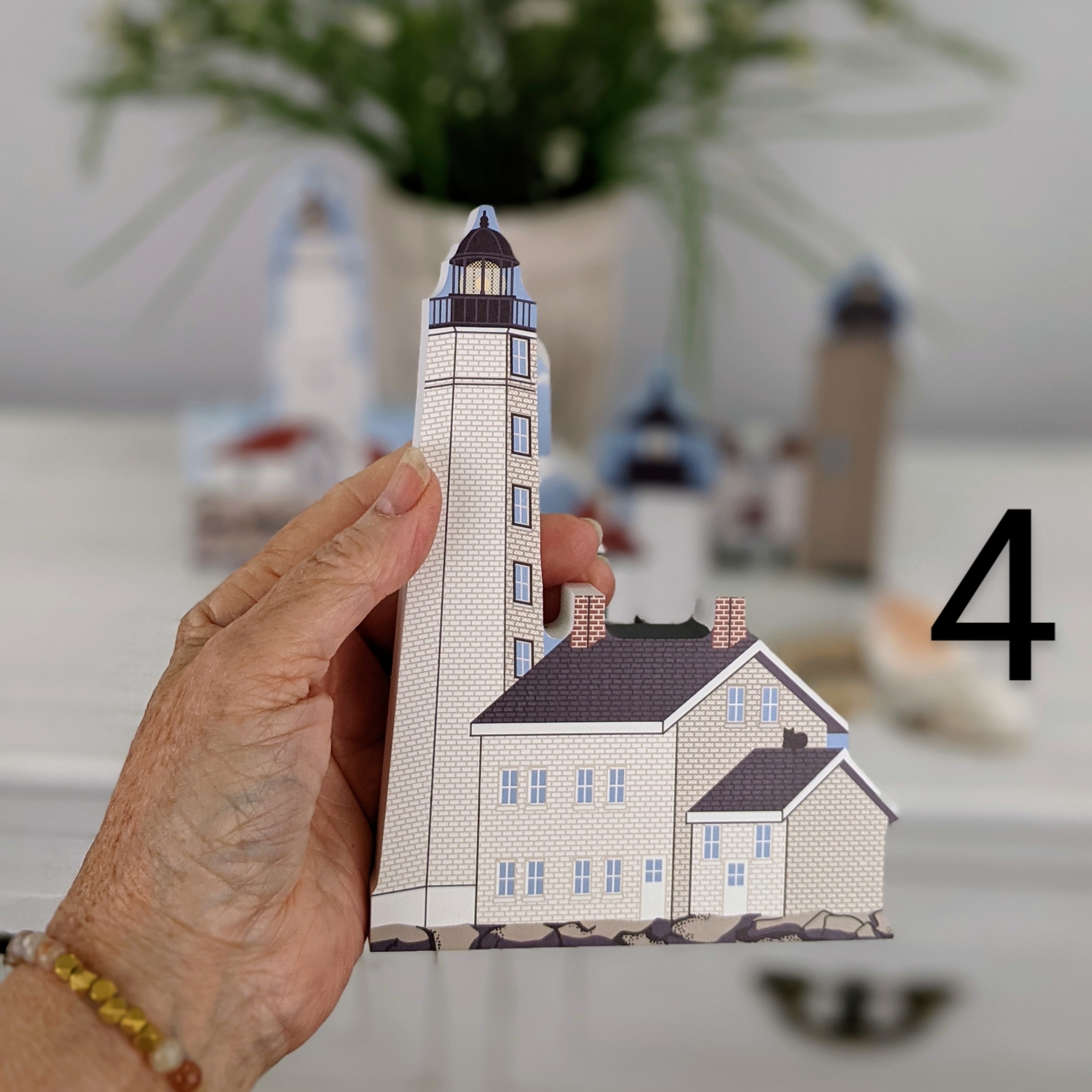 With its creation in 1760, the New London Harbor Light became one of the only four lighthouses standing along colonial America's coasts.

Although it was able to withstand the Revolutionary War, it couldn't survive the effects of wind and weather and was rebuilt in 1801 after a 10-foot crack opened its walls.

TRAVEL TIP: This lighthouse is privately owned, however, you can view it from Pequot Point Beach or take a tour on the Long Island Ferry.

Originally built in 1768, Plymouth Light, also known as Gurnet Light, is a historic lighthouse located on Gurnet Point at the entrance to Plymouth Bay.

The light is accessible only by passing through the town of Duxbury. The tower is located inside the earthworks of Fort Andrew, which existed in the Civil War, War of 1812, and Revolutionary War.

Today, this light helps guide sailors to the Cape Cod Canal.  Plymouth Light was listed on the National Register of Historic Places as Plymouth Light Station on March 8, 1977.

TRAVEL TIP: This lighthouse property is owned by the Project Gurnet and Bug Lights organization, and the Coast Guard. Visitors are not allowed to drive to the lighthouse as it is private property. However, contact Project Gurnet for possible tours and overnight accommodations.

We handcraft all of our keepsakes in Ohio from ¾” thick wood with detailed front designs and written descriptions on the back. They can be set neatly on a shelf, desk, or narrow ledge such as wainscoting, window, or door trim.

Group them with other Cat’s Meows to create your own little Village!

Look for Casper, our black cat mascot, sitting or reclining within the design. He's the sign of an authentic Cat's Meow souvenir replica. 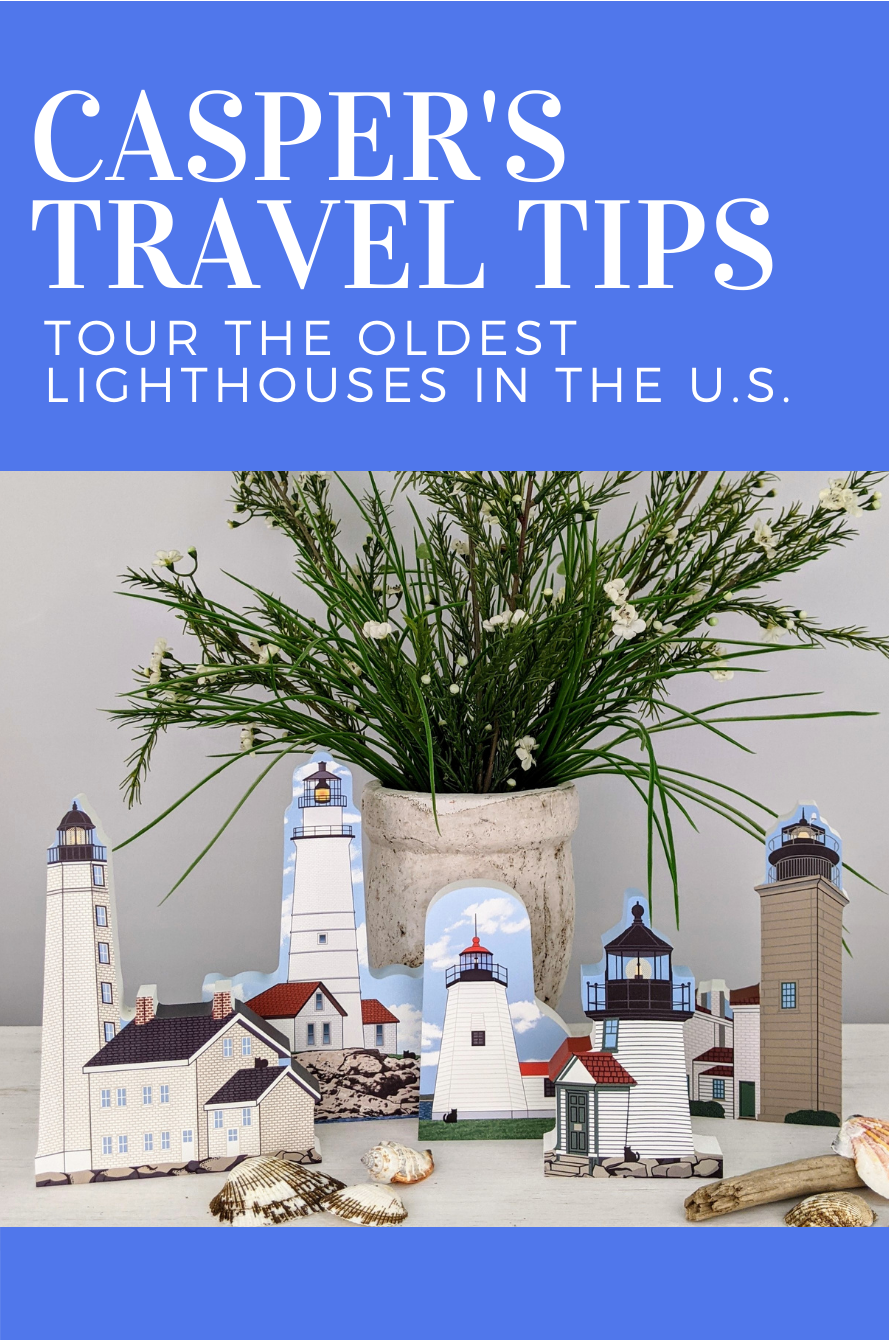