Sheila Buys Herself A Lighthouse

Lighthouses are a popular Cat’s Meow item with collectors usually buying more than one to include in their home décor. But what if buying a Cat’s Meow replica just isn’t enough?

Long time Cat’s Meower, Sheila Consaul boasts about owning a “ton of Cat’s Meows” including her prized collection of Skaneateles, NY where she grew up.

But when it came to lighthouses, she had to buy the real thing! That’s right, you read correctly…a real, live, sitting-on-the-water lighthouse! And…since she now owned a lighthouse, the next natural thing to do was create a Cat’s Meow keepsake. That’s how we learned of Sheila’s story.

“I have done historic preservation in the past,” related Sheila, “and I was looking for an unusual property for a summer home when I heard the government was auctioning off lighthouses.” So in 2009 she bid on the Fairport Harbor West Breakwater Lighthouse. Four bids later in 2011 Sheila finally owned a real lighthouse perched at the end of a break wall on Lake Erie. 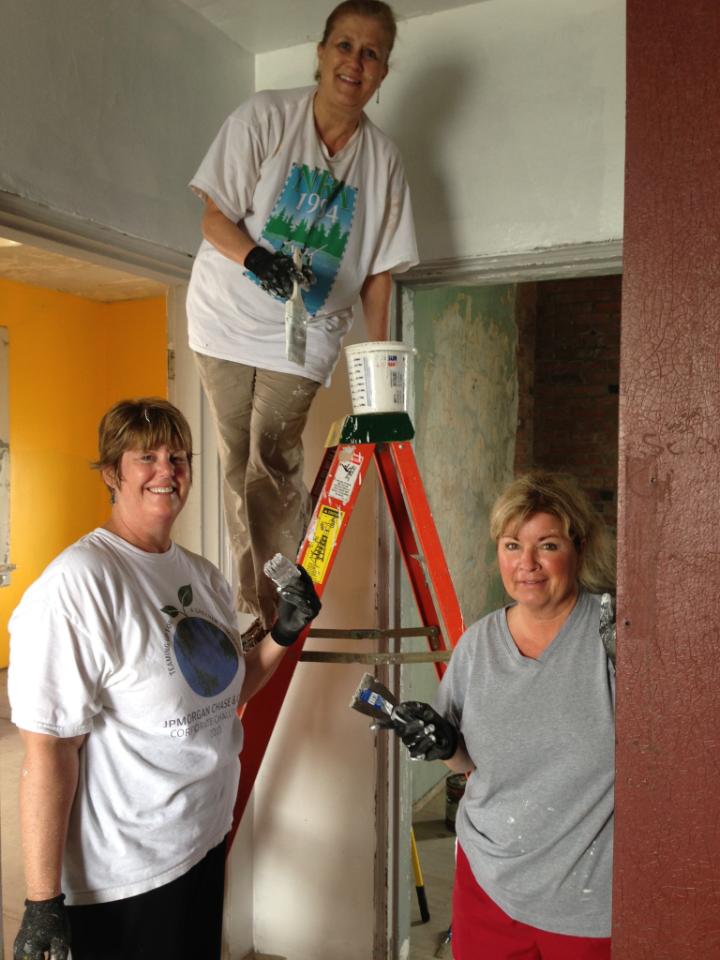 “Since 2011, I’ve been renovating it, mostly cosmetic things.” Sheila adds, “The lighthouse is on the National Register Of Historic Places, so there are renovation standards I am required to adhere to.” The inside of the lighthouse just needed a fresh layer of paint and floor refinishing. Sheila continues, “There’s no sewer, water, or electricity…back when it was occupied from 1925-1948, the keeper would have used a coal furnace, steam generator for electricity, and lake water.”

Sheila’s biggest renovation obstacles include fixing up the exterior and finding a solution for getting rid of gray water. So far Ms. Consaul has been using volunteers and donated items as much as possible.  But, this next phase is more complex and expensive. To raise the funds needed to paint the exterior of her lighthouse Sheila launched a fundraising project on Kickstarter, Inc. in 2015. And that brings us back to Cat’s Meow! 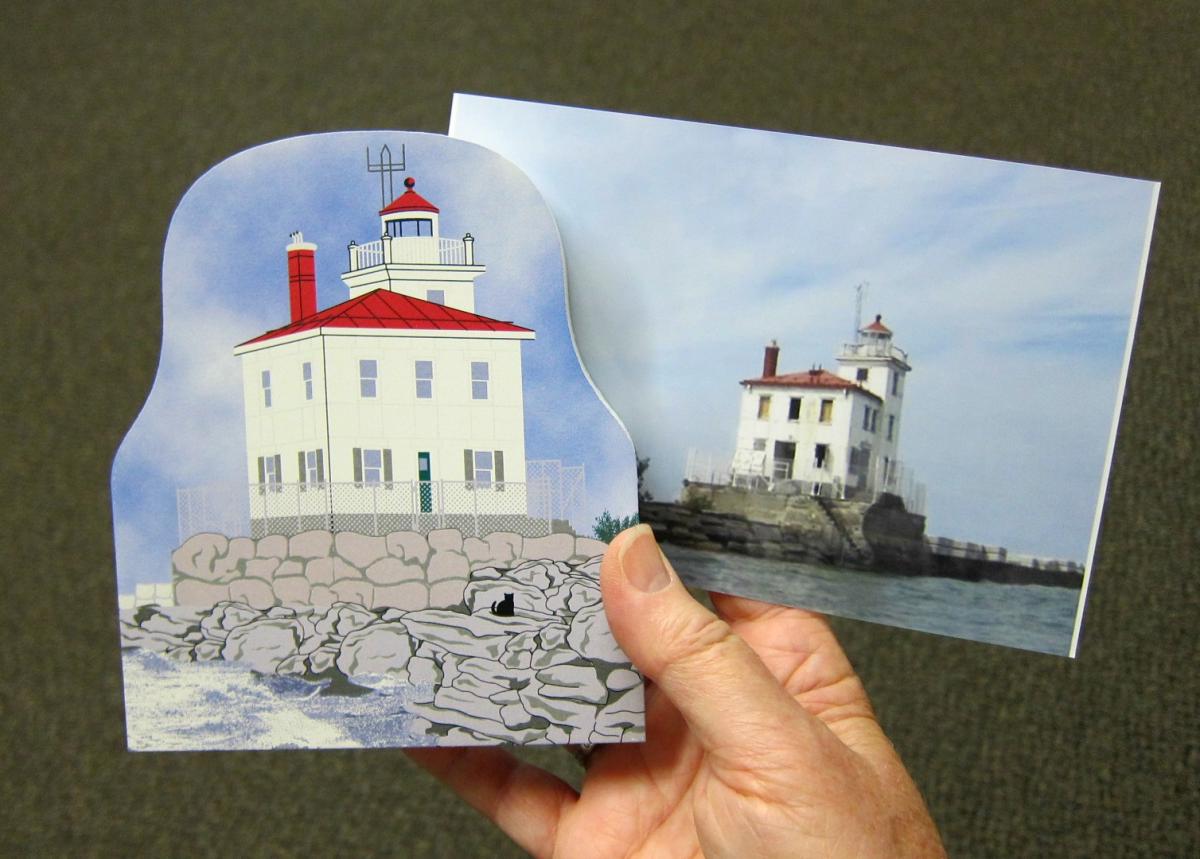 Each pledge level on Kickstarter usually includes an appropriate reward. As Sheila put together her pledge levels and rewards, she thought of Cat’s Meow and her own collection.

Sheila said that she loved Cat’s Meow work and that “being an Ohio based company, it totally made perfect sense” to offer a wooden replica of her lighthouse as one of the rewards. 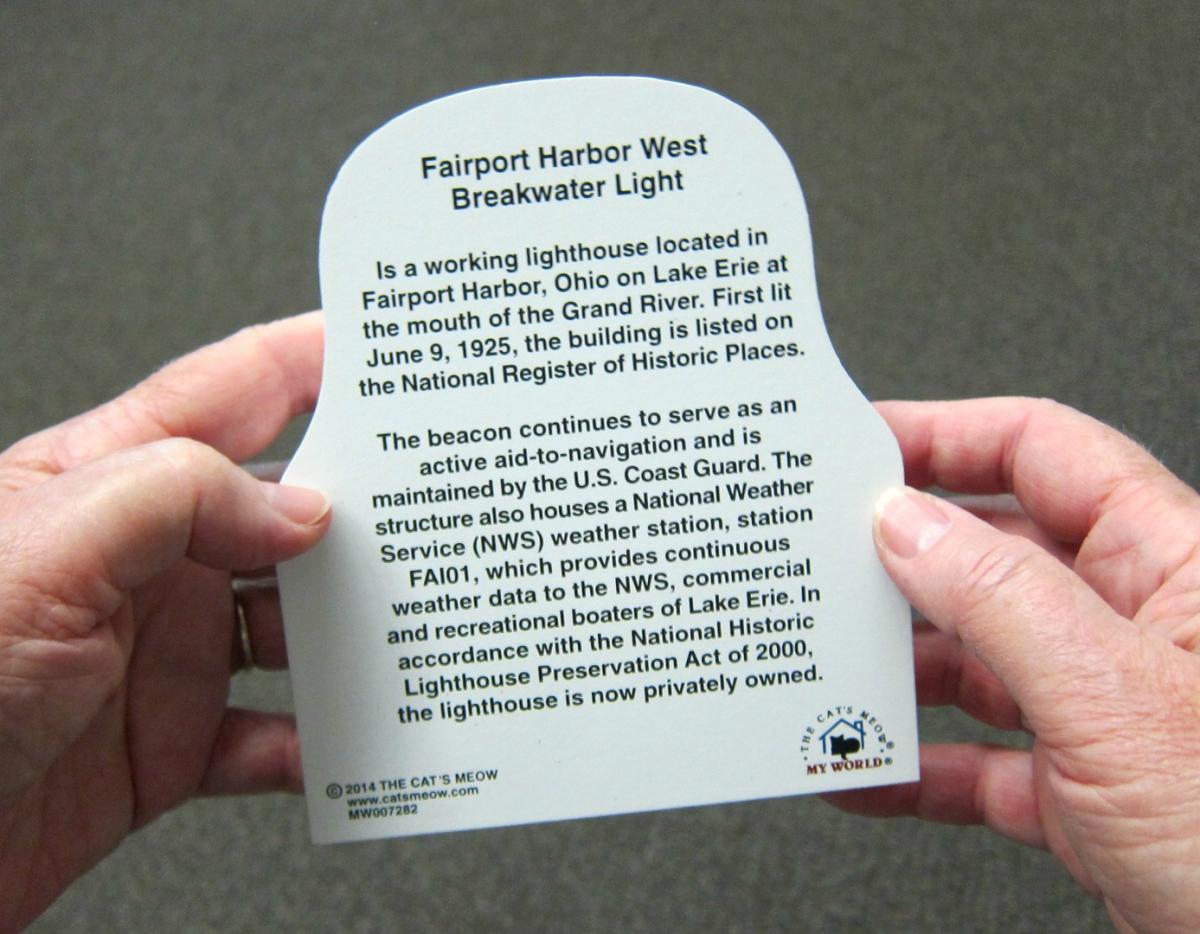 Of course, we at Cat’s Meow are so pleased to be a part of Sheila’s big project!

“It’s still a work in progress,” states Ms. Consaul, “and I’m pleased with the progress every year. More and more people come through. And there’s been more and more volunteers helping.” She ends, “Most people don’t get the concept of a lighthouse being owned by an individual…but, I’m very happy with my decision.”

Sheila's Official Web Page
The Lighthouse Facebook Page
How To Get Your Own Cat's Meow Creation Made
Subjects:
In the News
Product Mew-sings
Unique Uses
Share This To:

Move-in with all the other neighbors in our Village, and get your paws on monthly purrivileges including "insider" news and savings. We respect your email privacy.